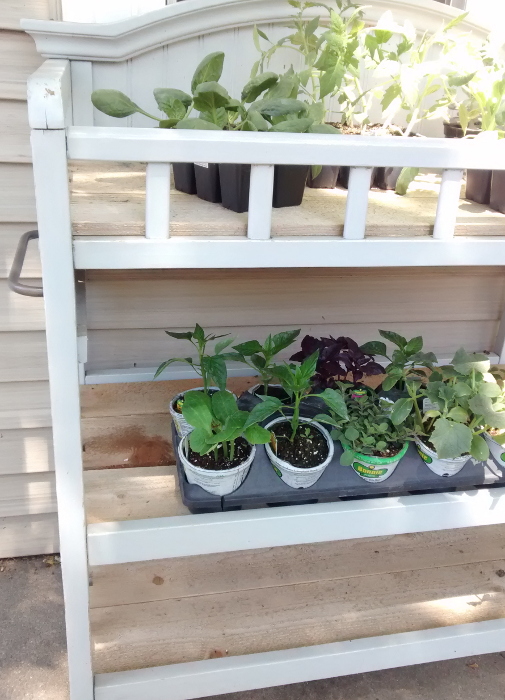 I’ll start off by saying I’m tired. Sweet Joe’s cooking up some food and I’m upstairs writing this post. This is real life as it’s Sunday, May 14 at 7:05 p.m. I’m happy and tired by the way. Not a glum tired. We worked in the yard ALL day and while I’d love to finish my secretary (it’s done!) and numerous other projects, I really need to get my butt in gear with the garden.

It isn’t anything special but, I’m proud of what we accomplished today and I hope you’re out there accomplishing what you need to get done. Not enough time in the day, right?

We started off by going to the store to pick up mulch, composted manure, some veggies and herbs, succulents, and a hose. We picked up all the mulch and compost bags first leading to a very heavy cart so we paid for them, threw them in the truck, went back in and picked up the plants. We paid for those, went to the truck when Joe says, we forgot the hose. Doh! It was a beautiful today in the mid-west and I wasn’t minding having to pay 3 separate times. 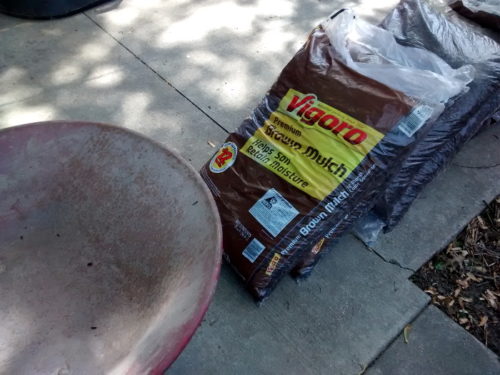 Our potting bench will be moved by the end of the day over to the garage and I like it much better there. I also love seeing it covered in new plants! 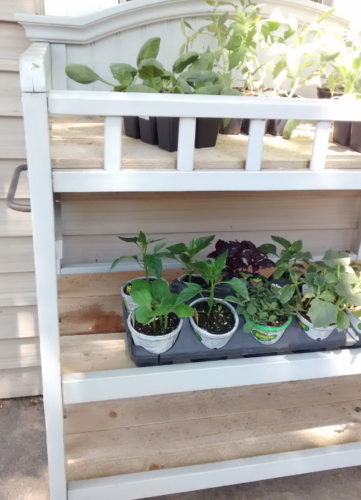 We planted horseradish some years ago when one of Joe’s friends said, “Hey, you want some horseradish?” Of course we did and now I know it will never stop growing. I pulled them out today knowing full well they’ll be back again tomorrow. We did keep some but, what else can you do with horseradish other than horseradish sauce? I’ve never bothered to look it up and I really should. 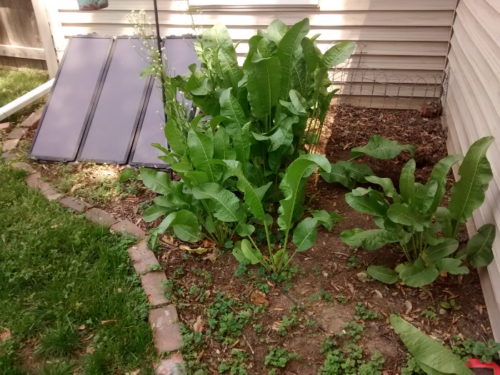 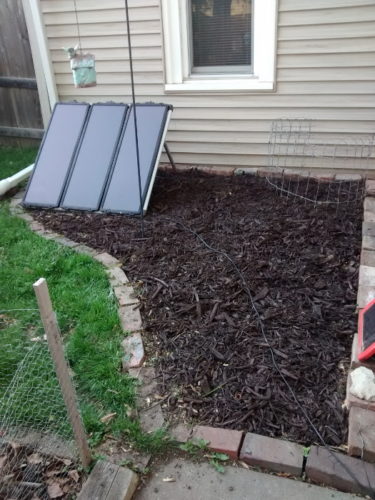 The bricks I just mentioned are piled up against a portion of our fence and they’re from this patio below. We removed a ton of bricks so we could build 2 raised garden beds within and I’m so happy we did it. We thought we’d miss this part of the backyard but, we don’t. We just sit at our patio table right outside the back door. 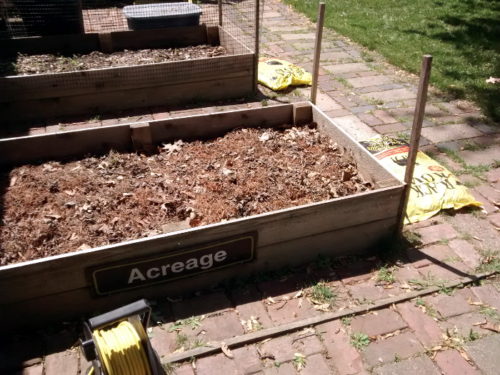 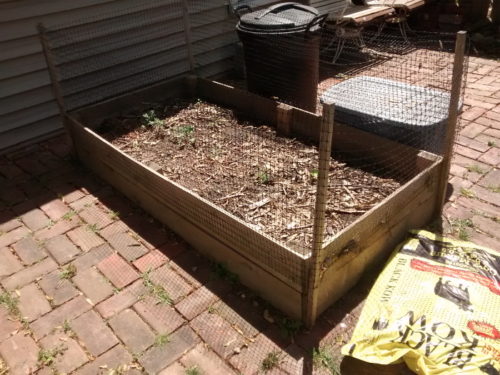 I love this acreage sign I got at a garage sale. We are homesteading wannabes living in a city. I know we can homestead wherever we are but, we really want land one day or at least be able to own some chickens.

Our fencing around these raised beds used to be a black plastic mesh that the bunny rabbits ate through with no problems so we switched to chicken wire. 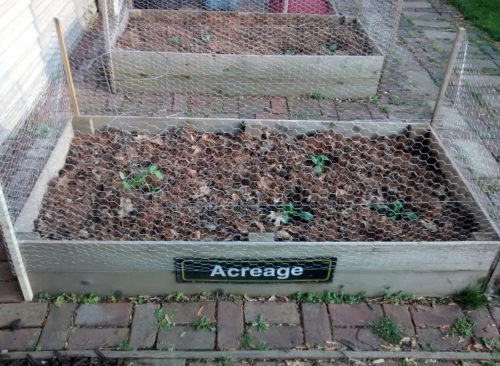 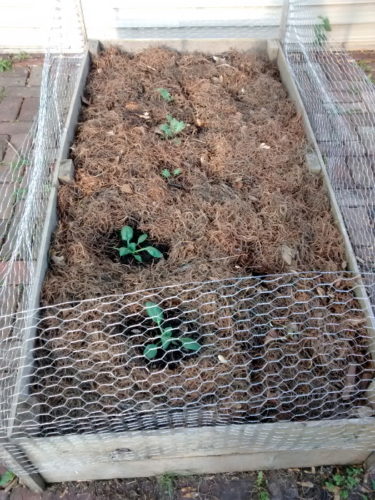 There’s a small piece of what used to be a grassy area which now is a desert wasteland. We placed a 3rd raised garden bed here and instead of trying to grow grass, we just add mulch. 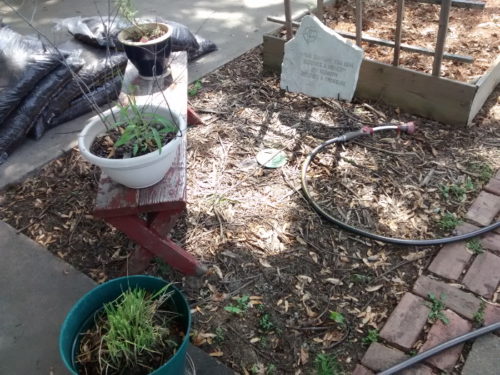 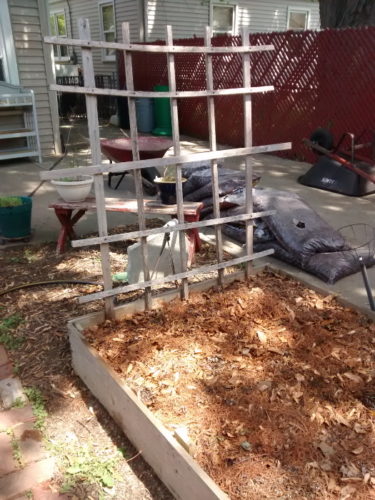 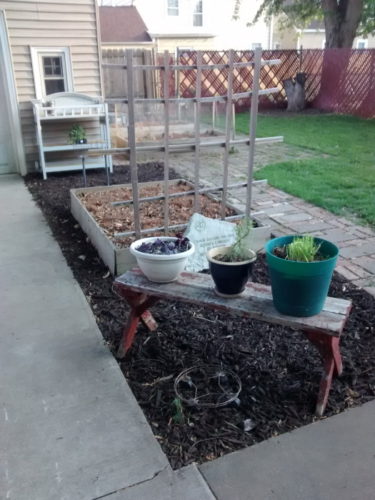 We have another garden bed that isn’t raised but, it’s right off the concrete patio. 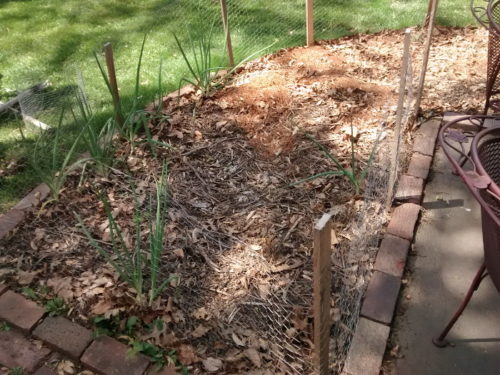 We already had onions growing here but, we added tomatoes and we also added our trellis which is 2 baby crib sides screwed together. We’ll be growing cucumber up one side and zucchini up the other. 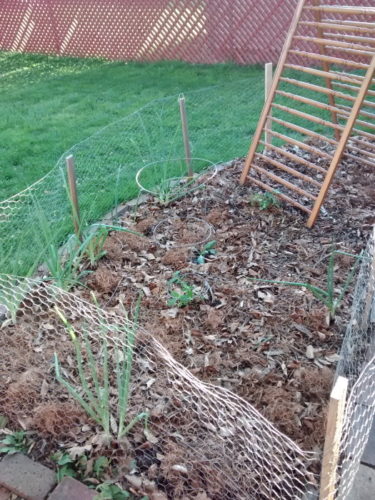 We also grow food in our alley. We planted tomatoes and peppers and already have garlic and asparagus growing. 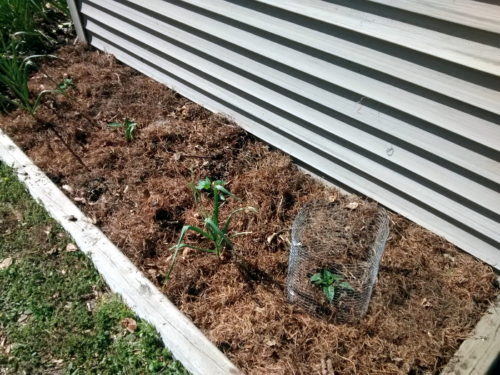 This is from last year’s alley garden. I tried to grow luffah with no success. We had iris’, asparagus, sweet potatoes, and a plant called prariedock. I love how so much can fit into this small space. 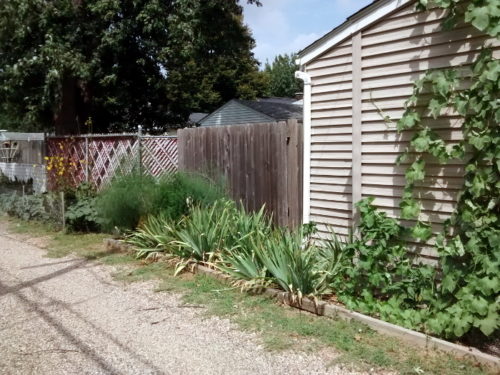 2 years ago we found out our local utility gives away free mulch to anyone wanting it so long as you take whatever they have. If they have a full truck, you need to take it. 1/2 truck full, take it.

This is what it looked like since the truck wouldn’t fit in our driveway. After we prettied up as much as we could with the mulch on all sides of the house and alley, we still had 2 truck loads left over that we dropped off at our relatives. It’s a lot of work but, it’s also pretty awesome that it’s free. 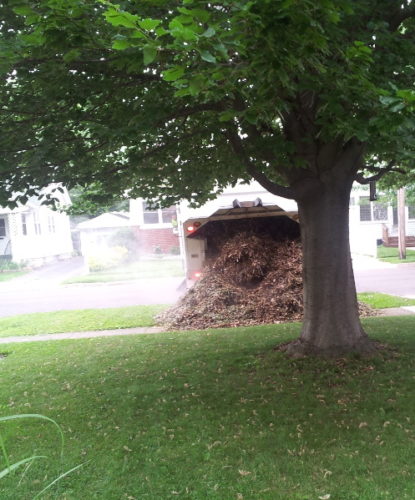 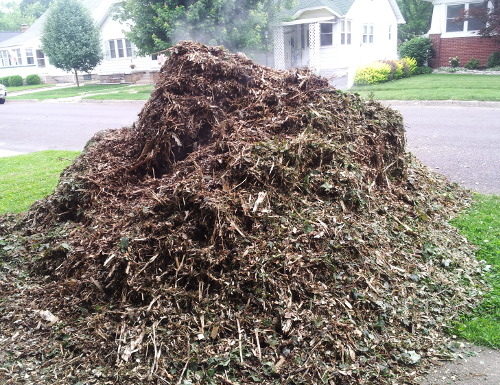 Here’s some more random things in our backyard.

Brussel Sprouts. The only way I can eat these are roasted. 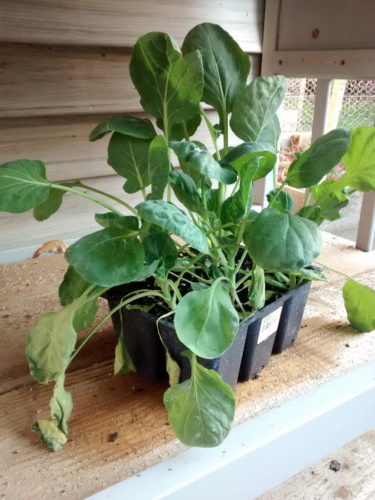 This hot & spicy oregano smells like straight up pizza. 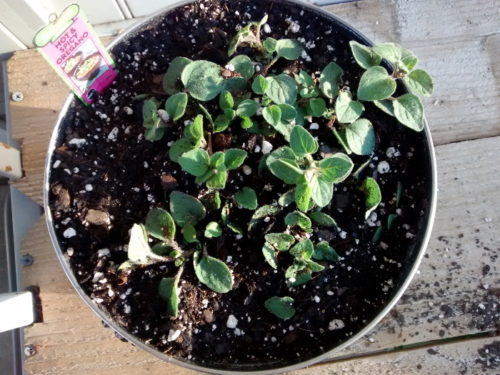 Purple basil. I’ve never tried it before and it just looks pretty. 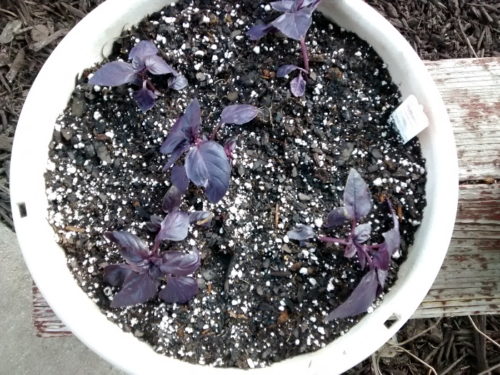 2 or 3 years ago we ditched our push mower for this reel one. I love it! I will say bumps are a little tricky and you shouldn’t it get too long or it won’t cut. The mower just flattens longer pieces when it rolls over it. 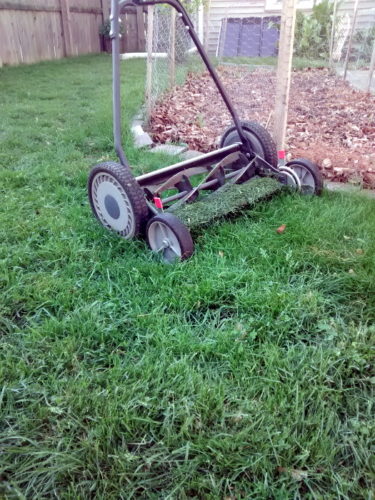 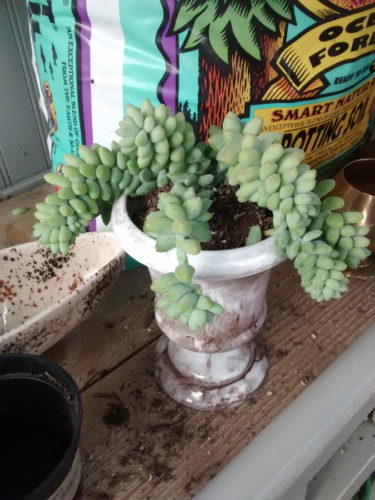 We have a couple wheelbarrows and the wooden handles on the black one broke since we put too much weight in it with the manure and mulch. We’re gonna have to rebuild it.

The tub and garbage can is how we compost. We actually stopped composting since our system isn’t that great but, we’re gonna start it up again and come up with a better process. 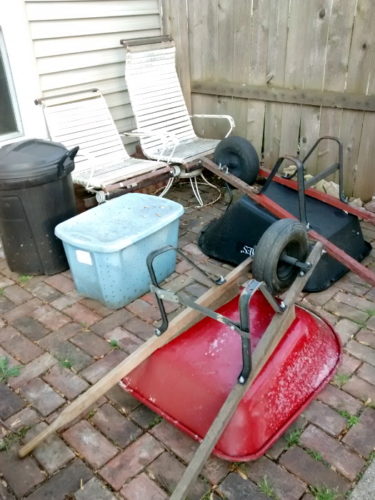 And, here’s the new spot for the potting bench. It’s nice to get everything cleaned up after winter. Even if it is already May. At least we got it done, right? Do you have a garden? 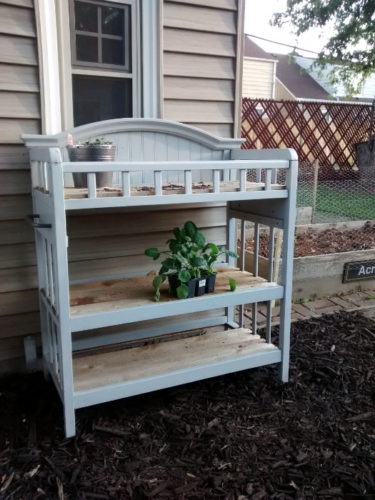 Turn An Old Changing Table Into A Potting Bench
Do you have an old changing table you don't know what to do with? Repurpose it i...
Turn an Old Sewing Machine Table into a Bar
Are you looking for old sewing machine table ideas? If so, have I got a fun upcy...
Fixing My Changing Table To Potting Bench Makeover - 8 Months Later
I'm refinishing the repurposed changing table I made into a potting bench last y...

3 thoughts on “Finally Getting The Garden Ready”